The 5th Sussex (Reserve) Battery was formed on the South Coast and would spend its time in England until October 1917 when it would join the Indian Division in Mesopotamia and take part in the Afghanistan War of 1919. 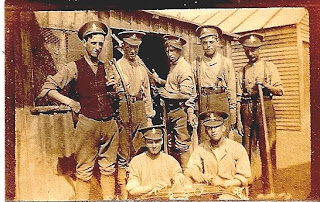 An advert appeared in the Eastboune Gazette calling men to enlist.

Colonel Astley Roberts commanding 2nd H.C. Brigade RFA is strongly desirous that the new battery now being formed should complete its establishment at an early date. Recruiting is proceeding briskly in St. Leonards, Bexhill and Hastings, but it is hoped that Eastbourne and district will be well represented in the new unit.

All men between the ages of 17 and 40 who are thinking of joining are urged to do so at once. Recuits can be enrolled any Monday and Wednesday or Friday evenings at 8 at the drill hall, the Goffs.

Artificers, such as shoeing smiths, saddlers and wheelers, are especially required. Pay and allowances, at Army rates, will be issued to all ranks.

If desired, an interchange with other batteries of the brigade will be arranged subsequently, so that members may be with their friends.

A young 17 year old man Edward Midmore would enlist on 24th September 1914. He stayed with the Battery until he was demobilised on 19th December 1919.
He saw service in Mesopotamia in 1918 and the Afghanistan uprising and war in 1919, although he was not directly involved in the fighting.

His grandson Brian Midmore has kindly let me publish his Grandfathers photographs for this website.

An Explanation of the RFA.

The Work of the Royal Field Artillery.

The Men - in Uniform.

The Barracks and Camp.